Indonesia is the fourth most populous nation in the world, and it is continuing to grow rapidly. The population here is incredibly diverse. There are over 700 distinct ethnic groups, but over 80% of these people hold to Muslim beliefs. The many islands of Indonesia command vital sea routes between Australia, Europe, and the Asian mainland. The island of Sulawesi, where Tolaki is spoken, has a coastline of 3500 miles, consisting mainly of four peninsulas separated by deep gulfs.

The Tolaki of Indonesia live in the southeast region of the island of Sulawesi. The term “Tolaki” refers both to the people group and to the language they speak. Like Indonesia as a whole, the Tolaki are primarily Muslim, but they also practice some traditional animistic beliefs and ancestral ceremonies as well. Tolaki people who are Christians, however, have found ways to redeem some of their traditional ceremonies into methods of publically giving thanks to God for his provision in the harvest. 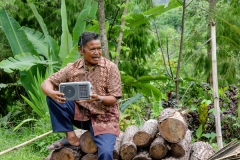