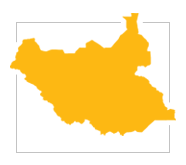 In a country torn apart by civil war, many civilians have been forced to flee their homes, and are now living in refugee camps. In these camps, listening to gospel radio broadcasts can bring a congregation together in the midst of a very hard place.

South Sudan is a hard place to do ministry. After gaining independence as a country in 2011, South Sudan broke into civil war just two years later. Tensions between the Dinka president and the Nuer vice president devolved into tribal warfare. Dinka and Nuer are the two largest ethnic groups in the country. While Dinkas and Nuers have in the past lived together peaceably, politically motivated violence has now caused tribal members to turn against their former neighbors. The cycle of panic, self defense, and destruction seems to be unending. And yet, even in the midst of this desperate situation, Words of Hope supporters are speaking the peace of Christ to those who need to be reminded of it most. Programs in the Dinka and Nuer languages focus on peace and reconciliation. As Dinkas and Nuers embrace Christ’s message to love their enemies, our prayer is that the war and suffering in South Sudan will come to an end.

Peace on the Horizon

We believe that where hearts are changed, actions will follow. The following is an update on Words of Hope’s work in war-torn South Sudan. ..
More Updates on South Sudan ›