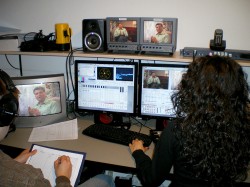 Since 2002, Words of Hope has been supporting Christian radio broadcasts in Turkey. Now, thanks to satellite television, the people of Turkey can SEE as well as hear the teaching of the gospel.

The program, Umut Dolu Sozler (“Words Filled with Hope”), is aired 3 to 4 times per week on TURK7, a Turkish Christian satellite television channel of SAT7 (an international Christian TV network headquartered in England broadcasting to the Arabic, Turkish and Persian people in the Middle East).

Each program is 12-15 minutes long and can be viewed at: www.turk7.com

A television version of the Evli ve Mutlu (“Married and Happy”) program is also slated to begin the fall of 2009. The program features a Turkish couple, a husband and a wife team of Christian counselors, talking about marriage and family from a Christian perspective.

The radio versions of both programs can be heard via the internet at: www.radioshema.com

We are excited to see the increasing fruit of this expanding mission in Turkey, and ask for your prayers as it falls upon the hearts of millions of Turks each week.