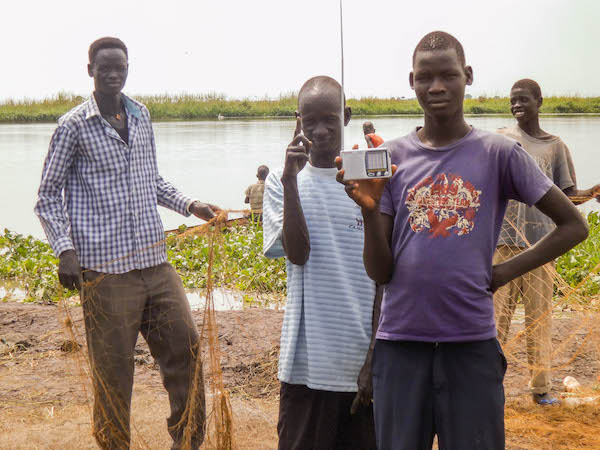 We are saddened to report that the violence that erupted nearly a year and a half ago in South Sudan shows no signs of abating. More than two million people have been forced to flee their homes in search of safety. Food shortages are now posing an additional threat to those in the midst of this conflict.

The United States recently provided $5 million in order to set up an independent court system aimed at bringing justice to those committing war crimes. Please pray that as individuals are convicted and stopped, the momentum towards violence will slow down as well.

Thankfully, Words of Hope has been able to continue producing radio programs that can be heard in the region throughout this time of conflict.

Words of Hope’s producer David Wat works on South Sudanese Nuer radio broadcasts. Before the violence broke out in South Sudan, Words of Hope was poised to build a new recording studio in Nasir specifically for the production of Nuer broadcasts. Since this region is now located at the heart of the conflict, however, all Nuer producers have needed to record and produce their programs from within neighboring Kenya.

Despite the horrors being experienced in South Sudan, David reports that he has “seen the Lord’s miracles” during this time.

In Need of the Gospel

David recently visited a refugee camp in Ethiopia where many South Sudanese are staying. Here he was able to meet many listeners. “They are really in need of the gospel,” says David. “Many people are listening to the radio, but the challenge is that not many people own their own radios. You can see five families gathering around one radio to listen.”

David continues, “Many have been displaced from their towns and villages. They have had to run for safety, and yet they love God and trust him even though they are far from home.” Words of Hope’s producers have received many phone calls from refugee listeners in Uganda and Ethiopia. “The radio is really changing many people to know Christ,” says David.

Please continue to pray for peace in South Sudan.