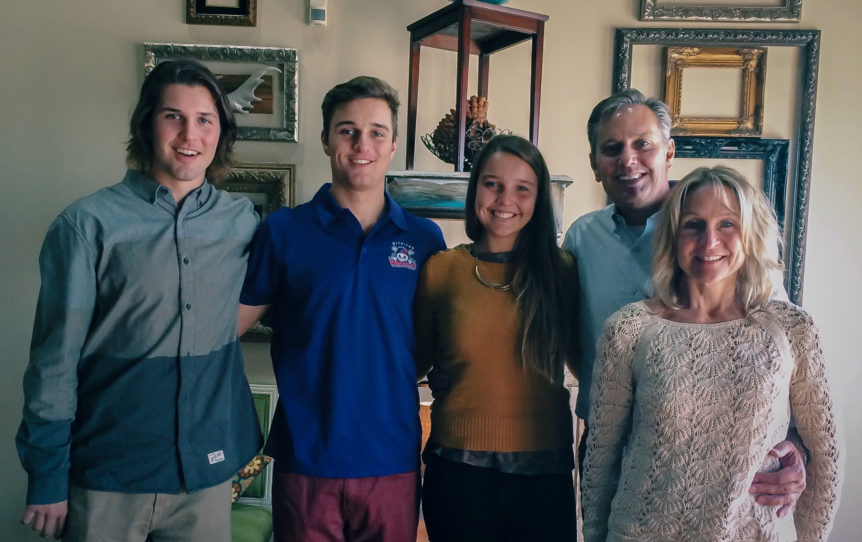 Twenty-four-year-old Steven has a tattoo of an eagle on his back.

Steven is a dedicated hockey player, having pursued the sport all through high school and college. When his best friend on the hockey team decided to get a tattoo, Steven didn’t want to be left out, but he also wanted his tattoo to be a little different.

A talented artist, Steven sketched out what he wanted his design to look like. His eagle is carrying a scroll in its tightly clenched talons. The scroll bears words of hope for Steven, found in Isaiah 40:30-31:

“Even youths shall faint and be weary,

and young men shall fall exhausted;

but they who wait for the Lord shall renew their strength;

they shall run and not be weary;

they shall walk and not faint.”

These words had become a point of anchor for Steven when, the year before during a difficult stretch, his mom had shared a Words of Hope devotional with him that cited those verses. Since he got the tattoo, Steven and his parents have returned to the verses again and again for encouragement and peace.

Several years later, Steven’s hockey coach at a secular university would see the words of faith inked on Steven’s back and read them aloud to the rest of the team before the players took the ice.

Words of Hope for Moms and Dads, Too

Steven’s parents, Tom and Mary, believe that the Words of Hope daily devotional has been helpful in their own spiritual walks as well.

Tom has coached hockey for years, and says, “I started using [the devotional] as a coach before every game. I would read aloud before a game, and we’d get everybody together. A lot of people suspected that we were going over the plays for the game, but this actually allowed the team to become a true team, because we prayed together and thought about things together. It really transformed us!”

As Tom coached the same young men year after year, he got to see their faith growing. Eventually the time came where if “we were running late, they stopped me and said, ‘We can’t go on the ice until we have read our devotional and prayed!’”

Mom Mary has found that the daily devotionals provide a great touchpoint with her kids. “It has become a way for us to build faith together,” she says. “It helps us reach out together.” Some days, Mary snaps pictures of a devotional passage and texts the photos to her kids. “Pretty soon,” she says, “our kids started doing it back to us!”

In parenting her children, Mary “leaned heavily on God and the devotionals, read them every day, prayed about them. Looked for what God was trying to teach.” She has watched her children growing in faith, and knows that their rootedness in Scripture has played a major role in their lives. “You can’t get much stronger than reading God’s Word daily, and that’s what the devotionals do.”

Today, Tom and Mary’s son Steven and their other children are using the Words of Hope daily devotional to reach out among their peers and friends. Their coaches have asked them to lead devotions for their sports teams. They are involved in discipling efforts through Young Life.

“I think that we underestimate the power of the Holy Spirit and prayer to move the Word toward the world,” says Tom. “It’s really kind of cool. We’ve raised our kids with these devotional habits so that they can use them later on. And when you see your kids building community with similar folks and touching other people’s lives, that’s just tremendously satisfying.”

“I think the Words of Hope daily devotional is essential, integral, and necessary, because it feeds the newest Christian and the oldest Christian,” says Mary. “It makes you stay in the Word every day.”

Thinking back to the permanence of his son’s tattoo, Tom smiles. “And that’s the other thing with the daily devotional. It’s actually not just for that day or that moment. Sometimes it’s something that can live on and continue to remind us of God’s strength.”