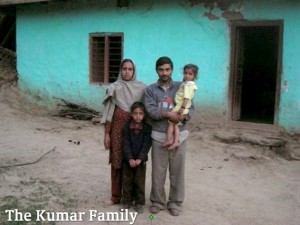 Dogri is spoken by several million people in the southern half of the northernmost Indian state of Jammu and Kashmir. This remote, mountainous area is primarily Hindu, and many places have been completely closed to the gospel. Radio plays an important role in reaching these isolated villages. Words of Hope’s Dogri programs are particularly popular, especially “Preme Kanne” (With Love).

Sunjay Kumar and his family live in a remote village called Balare. Sunjay is a poor landless farmer. Their village is 25 kilometers away from the nearest road, and 30 kilometers from the nearest medical facility. This became a grave concern when Sunjay’s daughter, Sheetal, became sick with a fever. When she didn’t recover, the family took her to a doctor. There, they learned that she had two holes in her heart, curable only by an expensive surgery.

Unable to afford the surgery, the family returned home defeated. But soon, they found new hope over the radio. While looking for another radio program, Sunjay accidentally tuned in to “Preme Kanne.” Soon, he was listening regularly.

On the program, he heard the presenter talk about Jesus as the son of God, the great physician. In their desperation to see their daughter cured of her ailment, Sunjay and his wife started praying to Jesus. They also called Sadiq Masih, Words of Hope’s Dogri producer. After hearing about their situation, he offered to pray for Sheetal, and connected them with a local pastor who prayed for her too, and began discipling the family. By now, the little girl’s condition was improving. The parents took her back to the doctor and were told that her heart was completely normal, with no holes in it. 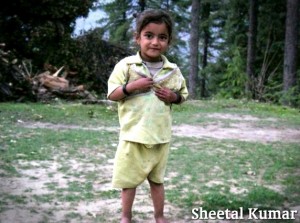 On hearing this, the father literally jumped for joy shouting praises to the Lord and thanking Him profusely. He put his trust in the Lord Jesus Christ and so did his family. They shared their testimony with those all around and many of their relatives and neighbors have since trusted in the Lord. The new believers and Sunjay’s family have formed a listening group with help from some wind-up radios provided by the Dogri producer. Now, they hope to start a church in their village. Praise God!