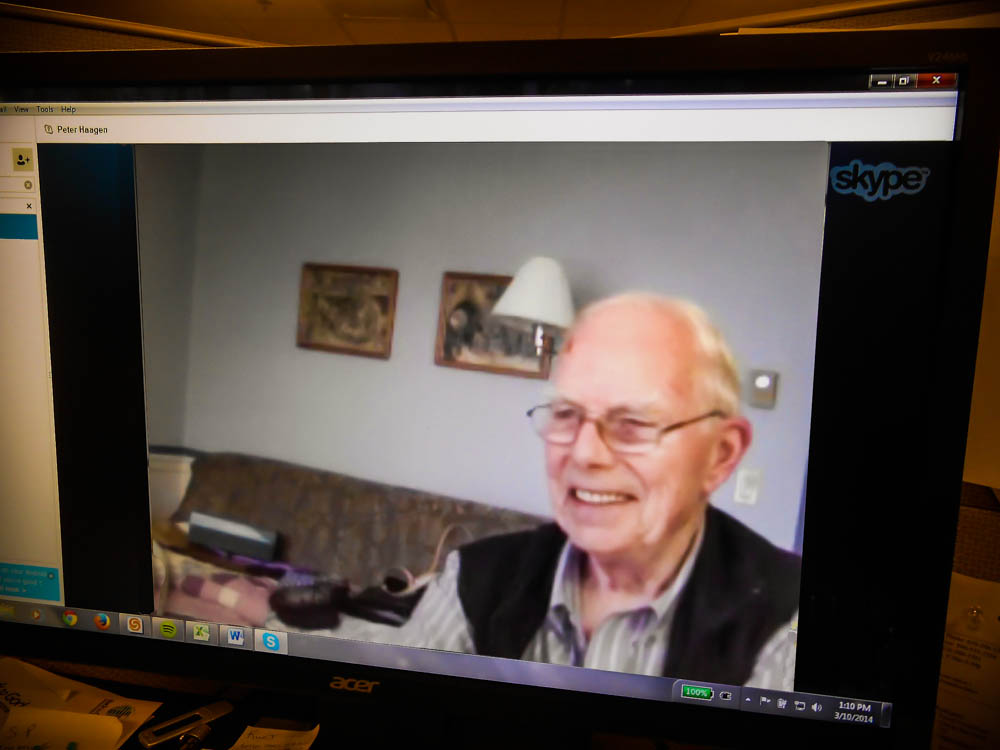 Peter Haagen was looking for a way to volunteer. He wanted to lead a Bible Study of some sort, he thought. A now retired baker and pastry chef, Peter had a computer at home, and wondered if somehow that could be put to use in his volunteer efforts.

As it was, the computer was great for games, but what if it could be used for more?

One aspect of this ministry drew Peter’s attention in particular. Spotlight English Clubs had been around for many years, being hosted mainly in churches. But now there was an opportunity for English-speaking volunteers with Internet access to host Spotlight English Clubs right in their own homes for students overseas—using Skype!

This, thought Peter, was something he could do. While less overtly Christian than the Bible Study model he had originally envisioned, he saw how this practical ministry was a way of planting seeds and showing Christ’s love.

Getting Started with Spotlight

After receiving a short training course online, Peter was given his choice of what country he wanted to host a Skype Club for. He chose a creative access country in S.E. Asia, as he and his wife had hosted exchange students from that region in the past, and he was familiar with the culture.

Spotlight English Clubs, whose materials are produced in partnership with Back to God Ministries International, follow a basic pattern.

English learners listen to an audio program that is written and spoken in Specialized English. Specialized English uses simpler vocabulary and sentence structure, and a slower speaking rate in order to make it easier for learners to follow. English learners are given scripts so that they can read the program while listening to it. Afterwards, they participate in activities or conversation with their English speaking volunteer so that they can practice speaking English.

Peter admits that hosting his first class was nerve-wracking. It was difficult to know if he was pronouncing his students’ names correctly, or even which name was their first and which their last as he scanned the page. But overall he was very excited.

His group comes online at 7:00 AM (that’s actually 9:00 PM in S.E. Asia). Peter welcomes everyone. They all introduce themselves. He has them take turns reading the text from the audio program. He asks them questions about what they have read to make sure they understand the words. The lesson lasts about an hour and a half.

But because of Peter’s dedication to his students, his time spent with them during the week always extends past the hour and a half mark.

He wants to make their learning experience personal, and so, as he prepares to email his students their weekly lesson, he also takes the time to write each student an individual note. He praises them for a job well done the previous week. He inquires why they missed class if any of them did. He makes sure they know that they can contact him at any time if they have questions.

And, to his surprise, they do!

He is in contact with his students all week long, and says he hears from at least one every day. They ask him for help if they are working on an English essay for a class. They tell him about what jobs they hope to have in the future. They even ask him for dating advice!

“I feel sometimes like a Counselor, a Mentor, a Father, a trusted Friend. Whatever you want to call it,” says Peter. “But I do enjoy it,” he adds. “They are my friends.”

His class started with around nine students, but through word of mouth, more and more English learners have heard of Peter’s Spotlight English Club and have asked to join. In less than six months, Peter’s group has grown to include nearly thirty students. He divides the class in two, meeting with one group on Mondays and the other on Fridays. He says he is about ready to start a third group as well!

None of the students in Peter’s class are Christians, at least as far as he knows. Most are Buddhist or agnostic. But Peter doesn’t shy away from issues of faith.

One of their recent lessons was focused on Acts of Service, one of The Five Love Languages from the book by Gary Chapman. To exemplify the concept they were going to be discussing, Peter sent a few pictures along with the lesson before class. One picture was of Jesus washing Peter’s feet. The other was of a plate of cookies.

The students discuss how Jesus’ actions showed love. They discuss how something as simple as baking cookies for a friend is a way to show love as well.

“I hope that I am sowing a seed,” says Peter. “Perhaps I am not reaping the seed, but I will leave that up to God.”

Peter’s dedication to his students is a tangible expression of Christ’s love. Words of Hope is so thankful for Peter, and the many other volunteers who make Spotlight English Clubs a reality.