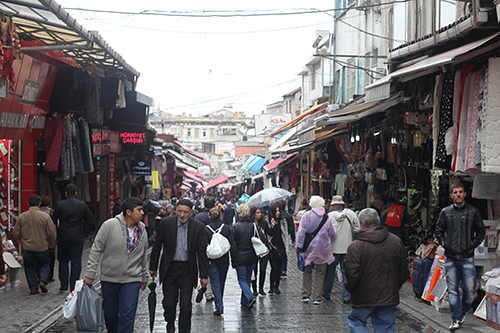 Baha* tuned in to Words of Hope’s Turkish broadcast while he was driving in his car. After quickly flipping from one station to the next, he stayed and listened to our gospel messages out of curiosity. The programs kept him listening for a long time.

Modern-day Turkey where Baha lives is nearly 97% Muslim. In fact, few Muslims in Turkey today have ever heard a thorough or accurate representation of the gospel.

Writes Baha, “What was being shared was completely different from anything that I had heard since grade school. The biggest thing that I struggled over was the fact that Christians teach that God is three Gods, but on your program you mentioned that Christians believe that there is only one God.”

The country of Turkey has what is known as an oral culture. This means that Turks often prefer information that is passed along verbally—through radio or television—over written communications. This gives Words of Hope Turkey a distinct advantage, since the spoken content helps tear down existing stereotypes and confusion about Christianity.

Opportunities to engage in conversation with listeners like Baha are an incredibly important part of Words of Hope’s ministry. Understanding complicated concepts like the doctrine of the Trinity draws non-Christians closer to making concrete steps of faith.

Baha still listens to the programs. He not only listens while driving, but tunes in at home and at work. He now says, “For sure I know that the things previously taught to me about Christianity by those seeking to put Christianity down are wrong.”

Our prayer is that once we have guided Baha to an appropriate translation of the New Testament, the Holy Spirit will continue to work in his heart, drawing him to faith. For now, we know that Baha is going to keep reading and listening, and coming to us with his questions.