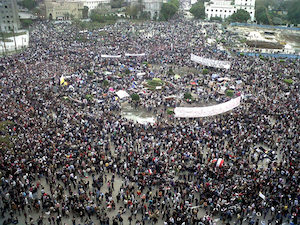 The unrest in the Middle East has brought many new freedoms to people living there. But these gains have come at a cost of many human lives and social instability. Victor Atallah, the General Director for Words of Hope’s Arabic programming writes,

“The turmoil and the accompanying changes are raising new challenges and concerns. All-in-all, the ‘revolutions’ have so far brought the young people losses, not gains, mostly in security and economics. In Egypt, our staff and volunteer teams were unable to go to work for eleven consecutive days. Twice in April, all women without the religiously prescribed head-covers feared to leave their homes. Some Egyptian Islamists widely proclaimed threats to attack women seen in public without head-covering. Crime has drastically risen in Egypt, Libya, Tunisia, and Syria.

Tourism has collapsed, businesses have closed down and many private sector jobs have been lost. There are rising costs of food, fuel, and transportation. Newly acquired ‘freedoms’ have brought union strikes, demands for salary raises and much tension. The overall mood has changed from euphoria and idealistic expectations to anxiety and confusion.”

In all of that we see gospel opportunities. It seems that in such times people become more open to spiritual alternatives. A text message from two young Egyptians – both Muslim university students reads: ‘…we find firm certainty in the discussion we heard about the new humanity. We need to learn more about that idea…’ Please continue to pray for your Arabic broadcasting teams as they seek to share the good news with millions of anxious people in the Arab World.

Words of Hope broadcasts thirty-minute programs each night in the Arabic language to a potential audience of over three hundred million people.