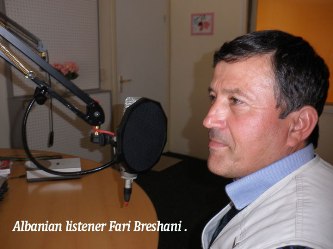 Words of Hope’s primary Albanian partner Radio 7 regularly interacts with many listeners who express appreciation for our daily broadcasts in their language.

A listener named Fari Breshani recently wrote a letter which was intriguing on two counts. First, he lives in a remote village in Skrapar county which seemed far beyond Radio 7’s coverage area. Second, Fari stated in his letter that he had never met another Christian and had become a believer in Jesus by listening to Radio 7’s Bible teaching programs. His letter specifically mentioned the teaching of Pastor Albert Dosti who voices Words of Hope’s daily Albanian broadcasts.

Since there are no churches anywhere in the region where Fari lives, Radio 7 invited him to visit the station’s studios outside Tirana. He soon did so. During that visit Radio 7 learned that the reason Fari is able to hear Radio 7’s FM broadcasts was due to the lofty altitude of his home village (high atop a mountain). What was even more remarkable was the depth of Fari’s commitment and mature grasp of Christian principles—particularly since he had never met another believer or attended any church! During the meeting he surprisingly asked, “As a believer in Jesus I would like to start tithing but do not know how to do that. To whom should I give my tithe?” Since he had never before met any fellow believers and knew of no churches in his area, Fari could not understand how Biblical tithing is supposed to work! To whom could he present his gifts to God?

Radio 7 has since connected him with the pastor of the nearest congregation near his mountain home. His story is another encouragement to the fruitfulness of gospel broadcasts for evangelizing and discipling. Praise God!