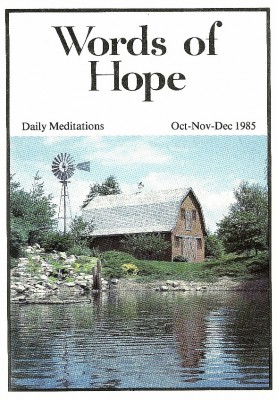 In October, 1985 Joan Zeldenrust wrote a series of devotionals for Words of Hope entitled, “From a Sheep’s Point of View.” At that time there was no international distribution for the devotional. Yet somehow a copy made its way to the country of Ghana, West Africa, to the floor of a taxi, where it was picked up by a young man named Charles Mensah.

A Muslim and an accountant, Charles Mensah was both religious and intelligent, yet he was confused by the language used the devotional. He wrote to Joan asking her, “How can I learn more?” and over the next two years, Joan and Charles wrote letters to one another. Through this correspondence and the work of the Holy Spirit, Charles committed his life to Christ. But his decision caused his wife to leave him and take their children.

Joan and her husband Bob paid to send Charles to Bible College and after graduation, Charles began his ministry. Armed with an 8mm film projector and a copy of The “Jesus” Film, his ministry started to grow. Correspondence with Joan continued and she traveled to Africa to visit Charles. Eventually, he was reunited with his family and today continues to share the gospel and build the status of women in Ghana. By 2010, Charles had established thirty-three churches and is still supported by Joan and her husband.

The Words of Hope devotional only played a small role in this story, but it was an important one. Joan herself explained that the devotional is, “a taste for what the Gospel is all about.” Today over 5,500 copies of the daily devotional are distributed in 27 countries. It is also available straight to any email inbox via www.test.woh.org. This story reminds us that when the Word of God goes out into the world, we never know where it will end up.