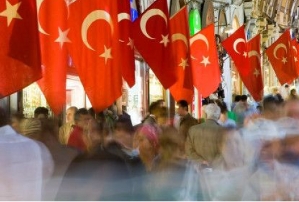 Do you know more about the bird or the country?

As you lift your carving knife to begin the traditional feasts featuring America’s favorite holiday bird, remember to pray for Turkey (the place not the bird). It’s true that the bird is named after the country. By the early 14th century the people occupying Anatolia (or Asia Minor) were mainly the Seljuk Turks (later called Ottoman Turks). The land they inhabited was named after them and was first referenced as “Turkey” in 1369. Later a peculiar tasty bird was found in the towns of Anatolia and began to be exported to England. It was known as “that bird from Turkey”. When the settlers arrived in the “new world” (later called “America”), upon seeing a similar bird, they said “look, it’s that bird from Turkey”. It wasn’t the same bird but the name stuck, so the bird we know and love is still called “turkey” today.

And the country of Turkey today? It’s full of wonderful people, a mixed bag of ethnic Turks (about 85% of the population) a smattering of Kurds, Armenians, Greeks, Jews, Europeans and others who were assimilated into Turkish culture over the centuries of Ottoman rule ending with the formation of the modern Republic of Turkey in 1923. Today Turkey remains the largest unreached nation in the world with 99% of the 70 million people being Muslim. Will you pray with us?

Aliza Adelman died last month. We didn’t know her before we heard the news, but wish we had. I got a call from a Turkish man who was a friend of a friend. The man explained that his grandmother had died and the family wanted to give her a “Christian”; funeral. We learned that Aliza came from Germany and married a Turkish man over 60 years ago and had lived in Ankara ever since. The story grew more surprising when the grandson said his grandma was also a follower of Isa (Jesus) and the family wanted to honor her request to have a funeral in a Protestant church. I was honored to conduct a beautiful memorial service for this Christian woman I’d never met. Several of Aliza’s, Muslim family members came to the front of the church to recount memories of her life, her kindness, patience, long suffering and goodness. It began to sound like a list from the Galatians 5 passage as the family noticed in Aliza’s life all the fruit that comes from a life filled with the Holy Spirit. It left me sad that I’d never met this woman. I would have asked her to tell me more of her story, why she came to Turkey (her name sounds Jewish), how she met the Lord, what it was like to live as the only believer in a Muslim family.

As I thought of her story I became so thankful for the many “out there” belonging to the large number of “uncounted believers” in Turkey. The official number of evangelical Protestant believers has been hovering around 3,000 for several years. Yet there are indications that the number who accept Jesus and follow The Way is actually quite a bit higher. Many don’t openly call themselves “Christian” for fear of losing their social and economic connections and being cast out of normal life here. Join me in praying for people like Aliza who are living lives of faith among their sphere of influence in quiet, gentle, Holy Spirit filled ways. May their impact on this society be great! *name changed

“Be joyful always; pray continually; give thanks in all circumstances, for this is God’s will for you in Christ Jesus.” 1 Thessalonians 5:16

We were having an unusually warm autumn. It was Sunday afternoon and we all headed out of the house. (Name Witheld) went to the Pazar to shop for the week’s fresh produce and my son and I went for a walk in the forest. In the thirty minutes between when we left and (Name Witheld) returned home, our home was broken into and ransacked. Several things were missing and it was a huge mess! The police came; it took hours to clean up. Several of our neighbors came to say “gec mis olsun”; (a Turkish phrase of condolence literally meaning “let it pass”) and offer help. One even brought a huge bag of apples from her family garden, because food always helps! Hours were spent after the break-in with neighbors coming to our door, asking questions and wanting to talk about the incident. I’ve been praying for ways to get to know my neighbors more but never dreamed it would happen this way! It was a unique way of sharing our hardship and showing how we can react with peace and with thanksgiving that not more was taken, that we weren’t home to encounter the thieves and because our things really belong to God, not us. It was the perfect opportunity to be joyful and thankful and in this way fulfill the will of God for us!

So often we wonder, “What is God’s will for my life?”. While many of the details remain unclear from day to day, much is certain. A life filled with thanksgiving is His will. We give thanks for you today, our partners in ministry, not only because it’s the will of God, but because it gives us joy! Now to Him is able to do exceedingly more than we can ask or think…

~Your friends in Turkey